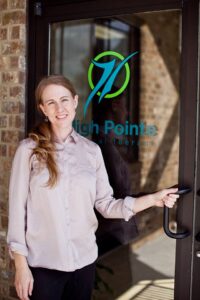 Physical Therapist / Owner  ~  Jessie is a 2001 graduate of the University of Evansville in Evansville (IN) where she earned both her BS and Masters degrees in physical therapy.  Prior to transferring to UE, she attended Murray State University in Murray, KY, where she majored in biology.  Most recently, Jessie completed the Executive Program in Private Practice Management through Evidence in Motion and earned her Doctorate of Physical Therapy (DPT) through the EIM Institute of Health Professions.  Jessie grew up in Columbia, IL, a suburb of St. Louis, MO, but moved to Clarksville in 2003 to be closer to family.  Jessie and her husband Rusty have three almost grown children – Addie, Gracie, and Will, who keep them very busy.  The family also has a sweet pup named Ruger (a Cavachon).  Besides spending any time she can with her family, Jessie enjoys writing, reading, DIY and antiquing. She enjoys Street Parking workouts and riding her Vespa named Bianca. She focuses her practice on pelvic dysfunction in both women and men and loves to trouble shoot dysfunctional movement patterns in athletes – especially as they relate to the pelvis and pelvic floor. In another lifetime, Jessie was a doula and she would love to return to it some day…maybe when the kids move out;-)

Zoe came to High Pointe Therapy for low back pain. Dedicated CHS athlete is her name! She put in the hard work in the therapy clinic and is now pain free. She recently earned the All-Area Golfer of the Year award! Go Zoe! ... See MoreSee Less

Thank you to the amazing staff and therapists who helped Zoe become pain free!

The students and professors in the Belmont University School of Physical Therapy need our help!

Your child does not need to be an active patient at High Pointe to participate.

If you're interested, please email Ellen at ellen@highpointetherapy.com by Saturday, 11/19/2022. ... See MoreSee Less

Are they holding this at your clinic or at Belmont?

Join our mailing list to receive our monthly newsletter with updates from the clinic and news about upcoming events!