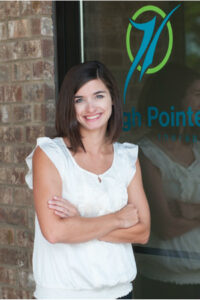 Physical Therapist  ~  Courtney is a 2010 graduate of Belmont University where she earned her Doctorate of Physical Therapy.  Prior to that, she attended and graduated Mississippi State University with a Bachelors degree in Clinical Exercise Physiology in 2007. Courtney originally joined the High Pointe team as part of her internship then stayed on as a technician prior to physical therapy school. She rejoined the team in August 2014 with a focus in pediatrics. Courtney is from Clarksville, TN and loves being so close to all of her family. She is married to Eric and has 3 little girls – Annabelle, Mattie Kate and Eliza…who keep her very busy! Courtney loves spending time with her husband and kids doing anything outdoors, running, and boating with her family.and cooking.

Zoe came to High Pointe Therapy for low back pain. Dedicated CHS athlete is her name! She put in the hard work in the therapy clinic and is now pain free. She recently earned the All-Area Golfer of the Year award! Go Zoe! ... See MoreSee Less

Thank you to the amazing staff and therapists who helped Zoe become pain free!

The students and professors in the Belmont University School of Physical Therapy need our help!

Your child does not need to be an active patient at High Pointe to participate.

If you're interested, please email Ellen at ellen@highpointetherapy.com by Saturday, 11/19/2022. ... See MoreSee Less

Are they holding this at your clinic or at Belmont?

Join our mailing list to receive our monthly newsletter with updates from the clinic and news about upcoming events!